Famous Concrete Buildings and Structures Around the World

Home » News » Famous Concrete Buildings and Structures Around the World

Famous Concrete Buildings and Structures Around the World

We often think of concrete as being a purely functional building material, used for roads, pavements, garden projects and foundations – but it can be so much more than that. Concrete isn’t just a strong and practical material; it can also be beautiful, offering flexibility to be formed into any shape. As a result, there are examples of famous concrete buildings across the world that are striking architectural statements, dating as far back as ancient Rome. 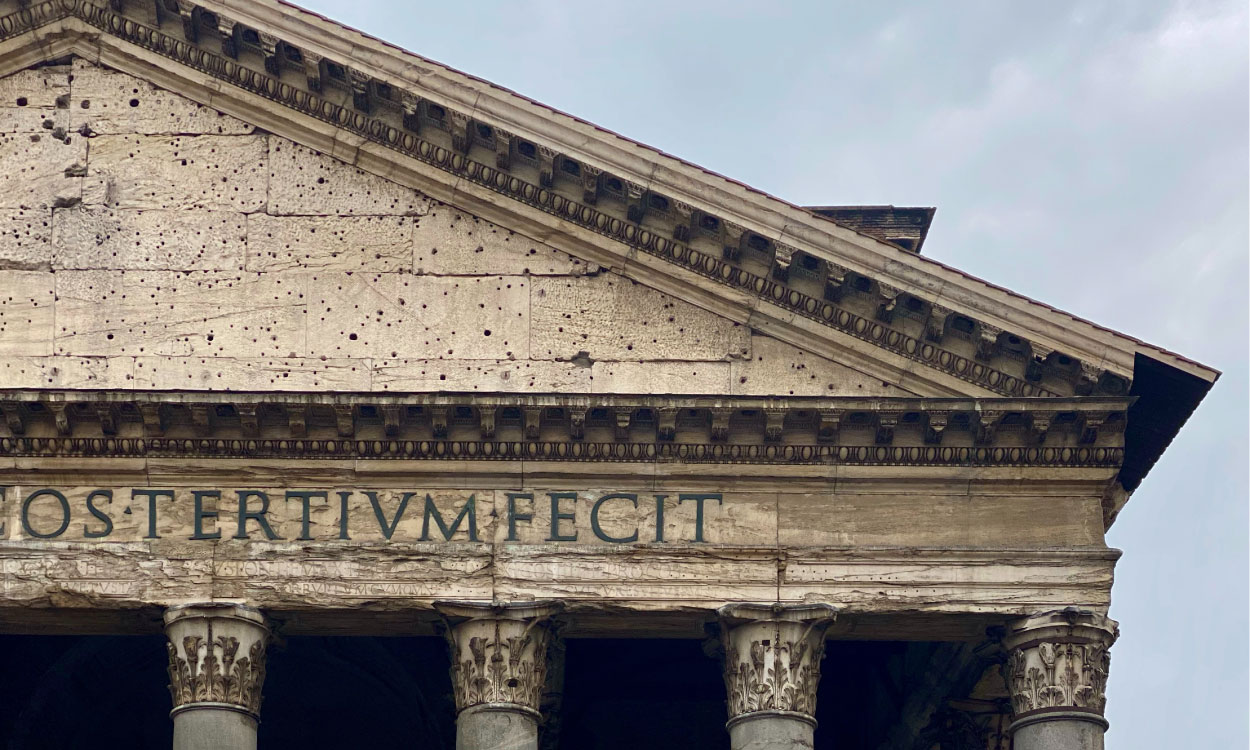 Built in 126 AD, the Pantheon in Rome was created using unreinforced concrete, and to this day it is still the largest unreinforced concrete building in existence. Originally built as a temple to the Gods, it is now a church and the most visited site in Italy with over seven million visitors every year.

The concrete dome of the Pantheon is 43.4m in diameter and 21.75m high, it is suspected to weigh over 3,000 tonnes. At the centre of the dome is a circle that is 7.8m in diameter which allows the light to flood in, illuminating the interior.

Travertine limestone was used to create the dense foundations that are 7.3m thick and 4.7m deep, surrounded by a reinforcement ring of an additional three metres. The dome was then made by mixing aggregates that were increasingly lighter towards the top of the dome.

Formed of an elegant series of gravity defying waves, Los Manantiales Restaurant in Mexico City was designed by Felix Candela. The dramatically proportioned dining space is the result of using creative vision and technical expertise to achieve a soaring, thin concrete shell roof.

Reinforced with steel, the structure resembles a symmetrical flower from above, appearing to be gently placed on the ground. The opening of each wave section is glazed, filling the building with light.

The Bank of London and South America, Buenos Aires, Argentina

Completed in 1966, The Bank of London and South America in San Nicolás, Buenos Aires was designed by Clorindo Testa and SEPRA. Having submitted their designs in response to a contest, they created this brutalist masterpiece, which is considered to be one of the most original international architectural projects of the 1960s.

This reinforced concrete structure is built between two very narrow streets and was designed to resemble a covered plaza. Using concrete in an innovative way, The Bank of London and South America was modelled as a functional sculpture, with shuttered curves along geometric patterned walls.

This huge apartment building in Marseille was designed by Swiss-French architect Le Corbusier. Built in 1952, it was part of a group of housing developments across Europe with the same name. The 18-storey reinforced concrete tower block is regarded as being one of the most influential Brutalist buildings of all time.

The building holds 337 apartments ranging in size from large family homes to studio apartments. Every apartment has at least one balcony, which can be seen from the exterior highlighted in bright colours. The building also has leisure facilities, a garden and even a running track on the roof terrace.

Le Corbusier’s famous concrete building is referred to by the architect as a communal ‘machine for living in’. The interiors are linked together with indoor streets and the living spaces are cleverly slotted together so that each home is spread over one and a half floors, with a double height ceiling to the main living room.

Made entirely from reinforced rough concrete and masonry trusses, SESC Pompéia, in São Paulo is an innovative leisure centre building that was built between 1977 and 1986. Designed by Lina Bo Bardi, the concrete buildings house a swimming pool, sports courts and indoor football pitches, attached to a huge cylindrical water tower.

The different zones of the building are connected by irregular concrete footbridges spanning up to 25 metres, and the main blocks are pierced with organic shaped holes for windows. The entire development was seen as a social experiment, marrying old industrial land and buildings with a new cultural centre for the area, it was referred to as ‘a citadel of liberty’.

One of the first examples of reinforced concrete used in constructing a church, Saint-Jean-de-Montmartre was built between 1894-1904.

The project was surrounded with scepticism over the pioneering materials, which at the time violated construction rules, meaning building was delayed by a lawsuit and a demolition order over the site until 1902. People didn’t believe that the structure would stand, even fearing it would collapse. So building was halted until several tests and technical demonstrations proved the strength and stability of the pioneering construction method.

Using a technique called ‘ciment armé’, developed by Paul Cottancin in 1890, the wire reinforced brickwork creates a framework of a cement armature, made from lightweight cement shells. The strength of this construction allowed the church to have ribbed vaults, and the pioneering technique was used in many important buildings that followed.

Just when we thought we’d seen everything that could be done with concrete, a famous concrete structure comes along that opens up another range of possibilities. The Eberswalde Technical School Library, designed by Herzog and Meuron uses images selected by Thomas Ruff acid etched on the prefabricated concrete panel exterior. The same images were also printed on the bands of glazing running around the building.

Adding texture and interest to a building in this way shows the huge flexibility of concrete as both a functional and decorative material.

Connecting the Atlantic Ocean and the Pacific Ocean, The Panama Canal is an 82km artificial waterway dividing North and South America. Starting in 1881, the French construction had dangerous engineering problems and many workers died in the process. In 1904, the United States took over the project and the canal was finally opened in August 1914.

Building the locks used 3.4 million cubic metres of concrete and required nearly 240 million cubic yards of excavation in the America construction phase alone. Now owned by the Panama Canal Authority, up to 14,000 ships pass through the waterway each year. Ongoing building work has taken place to maintain and upgrade the Panama Canal to expand the capacity in line with modern ship sizes.

Designed by Álvaro Siza Vieira, the ribbon like structure of the canopy is built using the same technology as a suspension bridge, where loose cables are infilled and strengthened with pre-stressed concrete. With a span of 70m by 50m, the canopy is just 20cm thick and at either end the thin cables can be seen connecting it to the supports.

This huge Art Deco-style statue of Jesus Christ sits on the 704m summit of Mount Corcovado in Rio de Janeiro. Completed in 1931, the 30m-tall figure has outstretched arms spanning 28m, and it has become emblematic of the city of Rio de Janeiro.

The famous concrete structure is made of reinforced concrete and covered in triangular soapstone tiles. It was designed by Brazilian engineer and artist Heitor da Silva Costa and Carlos Oswald, with input from French sculptor Paul Landowski. 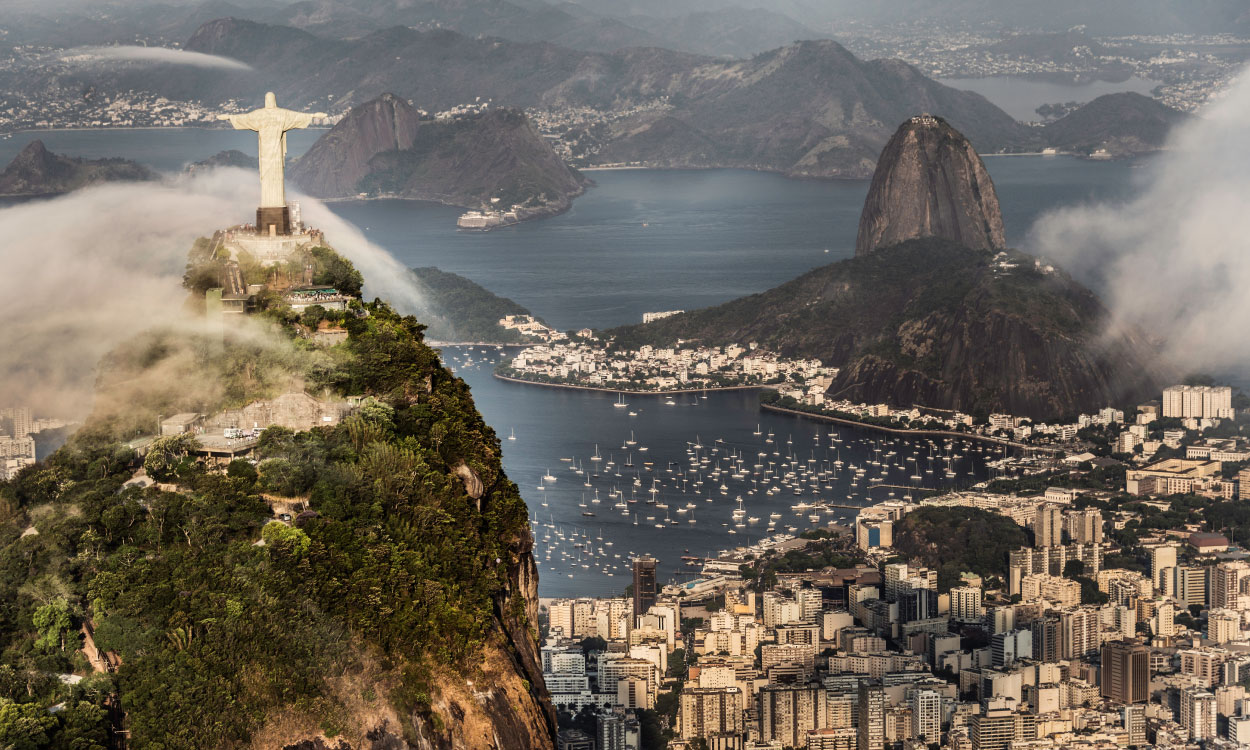 Designed by Marcel Breuer as one of his first religious buildings, St John’s Abbey Church is part of a large Benedictine monastery. The main building, with its glazed parts covered with honeycombed concrete mesh is a vast structure which uses rough, folded walls to create a huge interior space. The building has been referred to as looking like ‘mineral origami’, behind a huge bell banner.

The bell banner is 110 feet high and 100 feet wide, holding five bells and allowing glimpses of the stained glass in the façade of the main building. Breuer’s design is considered to be a landmark building and a milestone in the architecture of Catholic churches in America.

Pezo von Ellrichshausen’s compact house design was built on the rural Coliumo peninsula in Chile between 2002-2005. Constructed of entirely handmade concrete using a smaller mixer, four wheelbarrows and untreated wooden frames, the building is both a reflection of the harsh environment, and in contrast to its rugged cliff top surroundings.

Built in record time, in just 16 months between September 1941 and January 1943, The Pentagon is a five-sided building (hence the name!) made of 435,000 cubic yards of reinforced concrete.

Designed by George Edwin Bergstrom, a huge volume of foundation work needed to be carried out before construction of the building could begin. 4.2 million cubic metres of dirt and 41,492 concrete piles were needed to support the foundations.

Housing the headquarters of the US Army, Navy and Air force, the site covers 29 acres and roughly 344,000 square metres of usable floor space, and remains one of the world’s largest office buildings in the world to date.

It’s difficult to imagine the size of this famous concrete structure, which is made of an unbelievable 4,360,000 cubic yards of concrete, which is over 5 million barrels. Construction began about 30 miles outside of Las Vegas, Nevada in September 1930, starting with the excavation of diversion tunnels, foundations and spillways before the first concrete was placed in June 1933.

The Hoover Dam measures 660 feet thick at the base, and weighs more than 6,600,000 tons. Concrete creates chemical heat when it cures, so during this process the Hoover Dam was cooled via a refrigeration plant connected to 582 miles of steel pipe embedded in the structure.

From iconic sculptures and landmarks, to churches, infrastructure and experimental housing; from seemingly weightless floating canopies, to famous monolithic megastructures – concrete is such a versatile building material; the possibilities are really endless in terms of what you can create with it.

You might not be planning to build The Hoover Dam, but our team of friendly experts are here to help with supplying different types of concrete for both domestic and commercial projects of any size, from shed bases and patios to concrete for housing developments.

Simply contact us today to arrange a delivery of any grade or strength of concrete at a competitive price.

The Concrete Network is a registered company in England. All our calls are recorded for training and quality purposes.